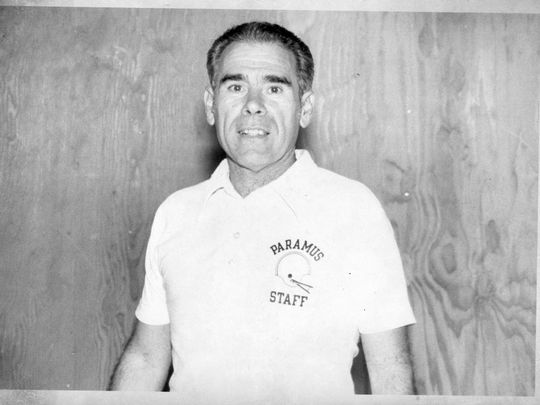 Obituary from The Record

The North Jersey high school football community lost a coaching legend Thursday when Pete LaBarbiera Sr. passed away at the age of 78.

A Paramus resident of 53 years, LaBarbiera’s coaching career spanned 27 years at three different North Jersey high schools, including Hasbrouck Heights and stops in Nutley and Paramus, where he amassed a 168-83-8 career record and five state titles over four decades.

The news of LaBarbiera’s passing quickly spread through social media circles late Thursday afternoon as family, friends and former coaches and players remembered the man who touched so many lives both on and off the field.

Among the mourners was current Hasbrouck Heights veteran head football coach Nick Delcalzo, who was an All-County defensive back and key member on LaBarbiera’s Hasbrouck Heights' teams from 1967-70.

“Coach LaBarbiera was like a father to me and to so many others,” said Delcalzo, who recently guided the Aviators to the North 1 Group 1 state title earlier this month in his 32nd season as head coach.  “He taught us values and how to be respectable men. He would come to a lot of Hasbrouck Heights games over the years and would give me and the team support long after he left this school.

“We remained in close contact over the years and up to the time of his passing.”

LaBarbiera grew up in Lodi, where he was an accomplished athlete at Lodi High School graduating in 1956.  He would earn a B.S. degree in physical education from Seton Hall University and a master's degree from Columbia.

LaBarbiera is best known for his coaching tenure at Hasbrouck Heights, where he guided the Aviators to five state sectional titles from 1967-81 and a 109-25-4 overall record with four undefeated seasons, and seven league crowns in 15 years.  He was also an accomplished track and field coach and served as the school’s athletic director as well as the Bergen County Coaches Association president.  A respected basketball referee, LaBarbiera was influential in bringing back the Bergen County Basketball Jamboree Tournament.

“I remember when I took the coaching job here at Hasbrouck Heights, and coach was there to give me advice," recalled Delcalzo.  "He’s going to be sorely missed.”

LaBarbiera’s 1969 Hasbrouck Heights team is considered one of the great teams in state history.  That year the Aviators finished with  a 9-0 record and the No. 1 ranking in the state and a final top 10 national ranking. Hasbrouck Heights scored 478 points in nine games, an average of over 53 points per contest, while allowing just 62 points the entire season.  Their average margin of victory was an astounding 46 points per game.

“He was a great teacher who cared about the kids,” said Toal, who was a two-time All-County running back and linebacker for the Aviators in 1969 and 1970.  “He just looked out for everyone even after you would leave high school.  He made sure to help you with college choices and decisions and he wanted you to do well.  “Coach was a real person. Next to my father, he’s the greatest man I’ve ever known.”

The following year in 1976, the Aviators repeated as BCSL National League champions and state sectional champions, finishing 11-0 and defeating Mahwah in the state title game.

His Hasbrouck Heights’ teams of the 1970s tied with Bergen Catholic for the most victories and highest winning percentage of all Bergen County teams of the decade, going 71-18-4 from 1970-79.

“Coach really knew how to prepare a team,” said Toal, who went on to play college football at Virginia Tech after graduating from Hasbrouck Heights.  “He was a great motivator and technician.  I guess you could say he was way ahead of his time.

“He was the first guy I would call when I needed advice.  Personal advice, coaching advice, you name it.  He’s the man I would want to get feedback from.  Even at my age, I would still call Coach LaBarbiera for his opinion.”

After leaving Hasbrouck Heights, LaBarbiera took the head coaching job at Nutley, a program that had won only one game the year before his arrival and struggled through some difficult years in the late 1970s.  Within two years, LaBarbiera guided the Raiders to their first-ever playoff appearance in 1983 at a time when only four teams qualified for the postseason in each group.

LaBarbiera was 48-26-2 in eight seasons at Nutley from 1982-89 and qualified for the playoffs three times (1983, '88 and '89), including the 1988 team that advanced to the North 2, Group 4 state title game where they lost a heartbreaking, 15-12 contest to the state’s top-ranked team Randolph in a classic matchup.  His final game at Nutley was on Thanksgiving weekend in 1989 when the Raiders edged neighboring rivals Belleville, 6-0.  He was named Essex County Coach of the Year in 1983 and 1988.

LaBarbiera's son Richard, who serves as the mayor of Paramus, said his father was an inspiration to so many people in his life.  "If you take a look at what my father had done for people who were not his family, you could imagine how he was with his own family," said Richard LaBarbiera.  "He lived no different than the way he coached.  He put others ahead of himself and meant so much to so many people.  My father's influence and inspiration is where I get my calling for public service."

In 1990, LaBarbiera became the sixth head coach in Paramus High School history and guided his hometown Spartans to an 11-32-2 record before retiring from coaching at the end of the 1994 season.

LaBarbiera is survived by his wife of 60 years Beatrice, five children: Peter (and wife Mary), James (and wife Ula), Richard (and wife MaryAnn), Anthony and Maria, 10 grandchildren, and is predeceased by a daughter, Suzanne.

"My siblings and entire family all grew up on the sidelines with my father," said Richard LaBarbiera.  "I can't tell you how many players my father coached that are active in my family's life.  All these years later, even going back to the Hasbrouck Heights' days, former players of his are like family to us.  It just goes to show you how influential he was to them growing up."