The Scholarhsip committee comprised of Dave Oshinsky, Caryn Starr-Gates, and myself, previewed a detailed list of applicants. We developed a system, really Dave's idea, by which we could score the students according to the criteria established and have a by-the-numbers evaluation. We then held a marathon Zoom meeting to review, sorted in, out, and down three times, until we concluded that the following girls would be our consensue choices. There were many worthy choices and it was a difficult task to complete the selection in the timeframe needed by PHS administration.

The two scholarship awards went to:

At the awards, Omayma received my second-to-last copy of the 1974 Amaranth, PHS's literary magazine. Why? She was the Editor-in-Chief of the 2022 edition of the Amaranth and I thought this would have more meaning and purpose with her than being in my closet.

Thank you to the many contributors who made this night possible. They are found on the Scholarship 2022 page

This is a summary of the evening.

There were eleven "Letters of Commendation from the National Merit Scholarship Program." 55 Academic Awards given in most areas of study. There are two Valedictorians this year, Iris You, and Alina Gu. Scholarships were awarded by elementary school PTAs, East Brook, West Brook PTAs, PASA, EAP, PAES, Paramus Rotary Club (9), Music Parent Association (10), Memorial Scholarships given in the names of Arlene T. Berman, Doris Behnke, John Villano "Caring" Award, George W. Hodkins (2), Jennifer Williamson (Class of 1984, East Brook Faculty and the teacher killed in the school bus crash on May 17, 2018 that injured 40 and killed a student), Joseph Navas (Class of 1975, Port Authority of New York and New Jersey Police Department, End of Watch: Tuesday, September 11, 2001), Ken Tashian Memorial Scholarship from the Paramus High School Alumni Association (2), Paramus Junior Baseball League (4), Pops Tashian (4), Paramus Lighting (6), Alphonse DeFillipo, Barbara Kruse "Good Person" Scholarship, Louis Lanzalotto, Mary Bellini, Benjamin Barbarosh, Frank and Elsie Scibetta, Scholarship Show (65!), Terri Roemer Paramus Run (10), Christ Evangelical Lutheran Church, Woman's Club (4), Coccia Foundation (5), Alex Cabrera, (5), "La Societa Onorario Ilatica (2),  Greater Bergen County Realtors, and DOG Award. (Not sure what all the acronyms stand for.) It's amazing that presentations started punctually at 7 and we were done by 9. In my opinion, if a presenter was not attending, names were rattled off for some of the memorial scholarships, envelopes handed out, and on to the next with little context.

I wandered around for a bit after taking some photo ops with the girls, viewing the trophy cases and taking some pics. Then I realized that the building had emptied out and it was me and the maintenance staff. The security guard walked out one step ahead of me. 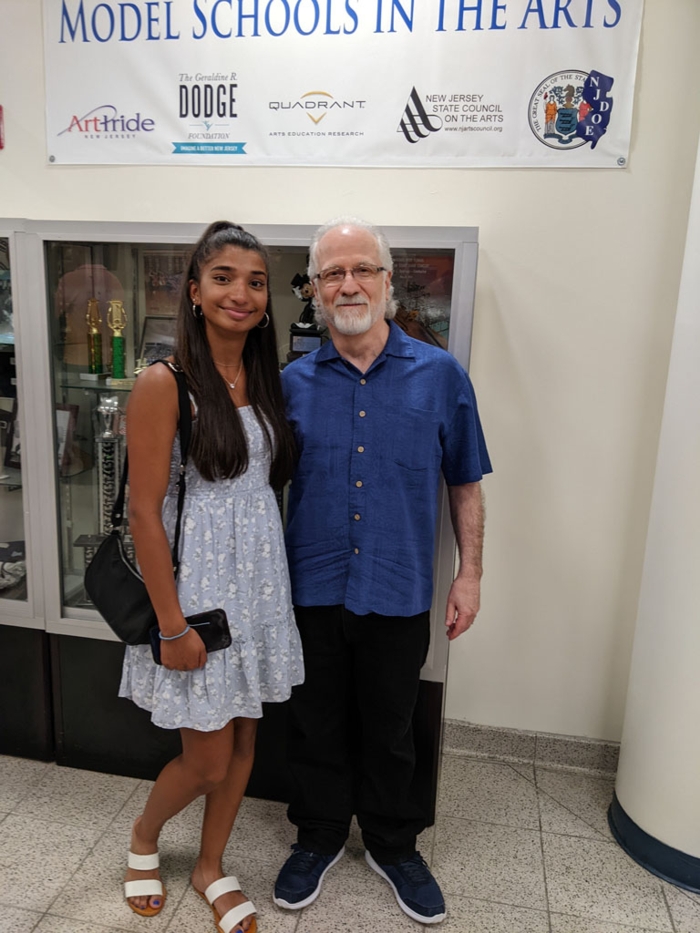 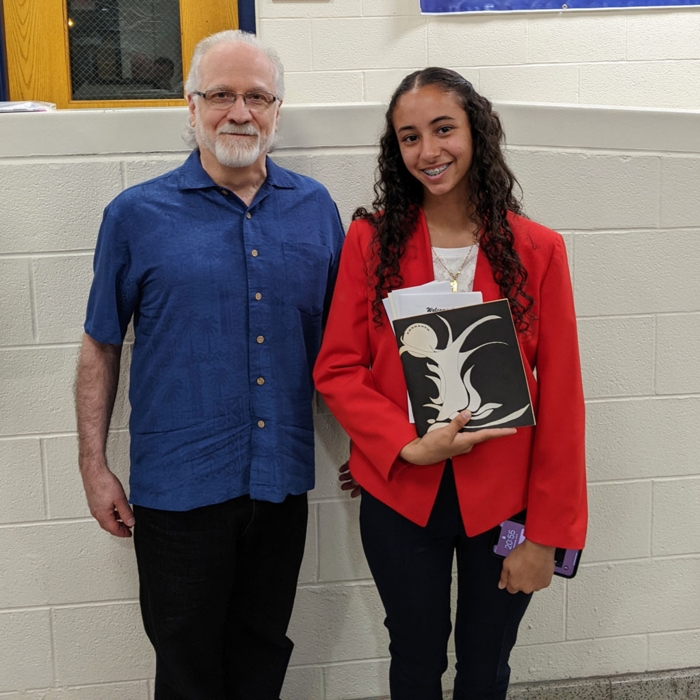 Stan Cohen/Omayma Jabara and the 1974 Amaranth 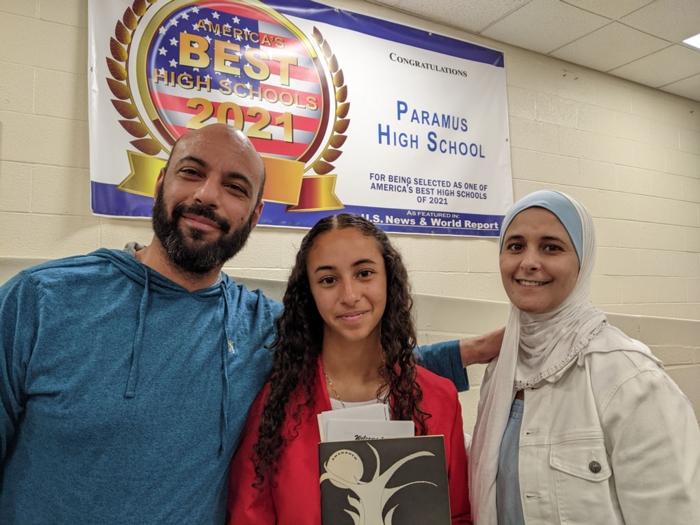 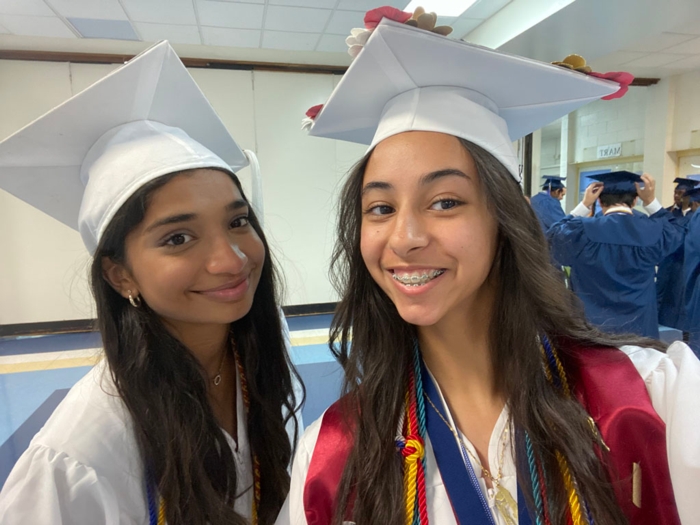 Getting ready to take the walk. Award-winning smiles. 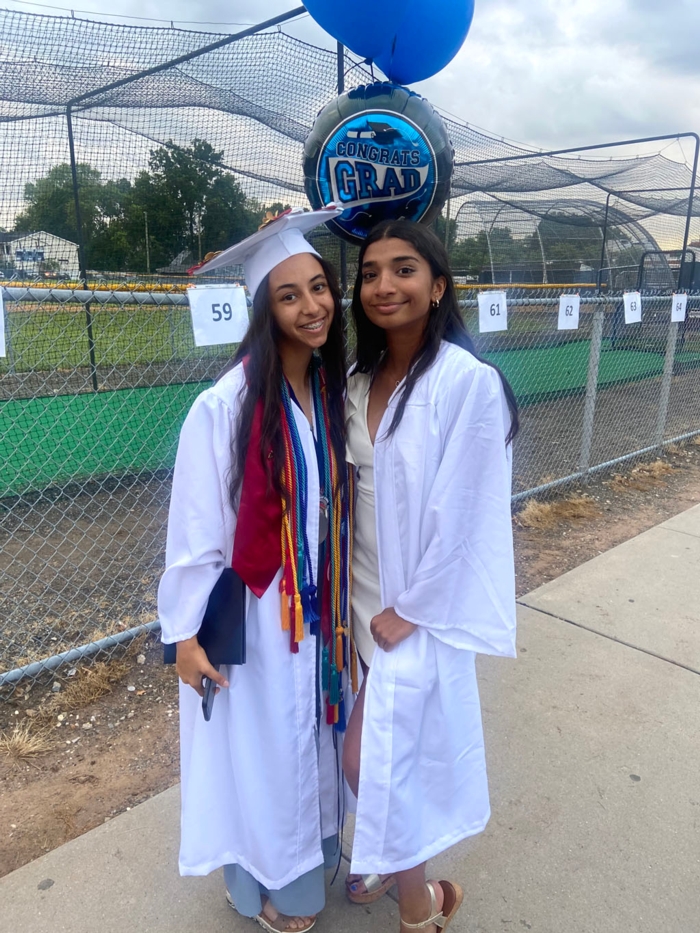 Omayma and Isabella with diplomas in hand. Omayma's was a very decorated graduate and honored to be so. "I’ll just list the significance of my cords, stole, and pins. Spanish Honor Society, National Honor Society, DECA, NJ Seal of Biliteracy, Varsity track and Field Athlete, Editor in Chief of Amaranth." 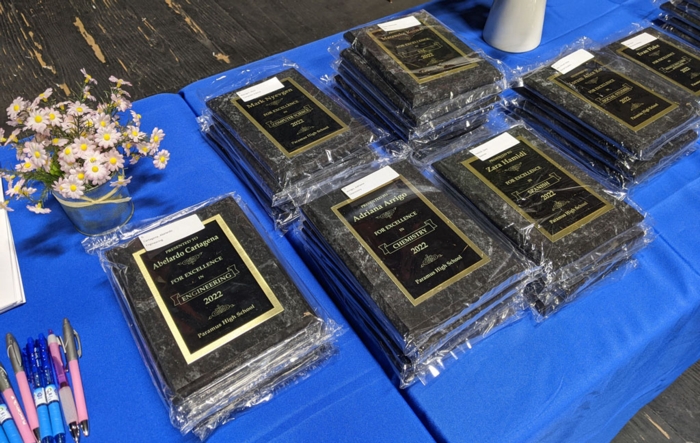 Just a few of the Academic Awards. The award details are mounted on a marble plaque. 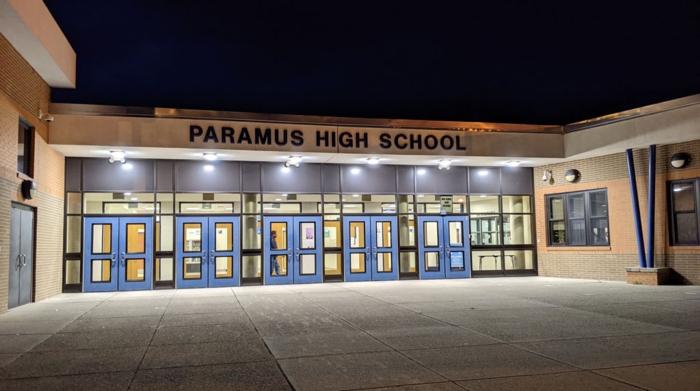 Last one out. Lock it down. Yes, that is the front of the building. Does anyone know when the construction happened?