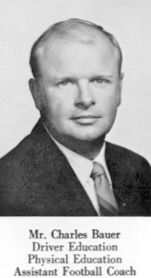 Charles A. Bauer Jr. "Buddy," 79, of Boynton Beach, FL and Long Beach Island, NJ, formerly of Paramus and Wyckoff, passed away peacefully on April 19, 2016 at his home in Florida after a long, and heroic battle with cancer.

Buddy was born and raised in Jersey City, NJ. to Ruth (Enderlein) and Charles A. Bauer, Sr. A graduate of Snyder High School in Jersey City.  Buddy was a veteran of the US Army and earned a BA degree from the Panzer School at Montclair State College, and began his 35-year career in education in Paramus, NJ.  He later earned his MA from Montclair State College.  He taught Physical Education at Paramus High School and was also the Head Football Coach at Paramus High School for many years.