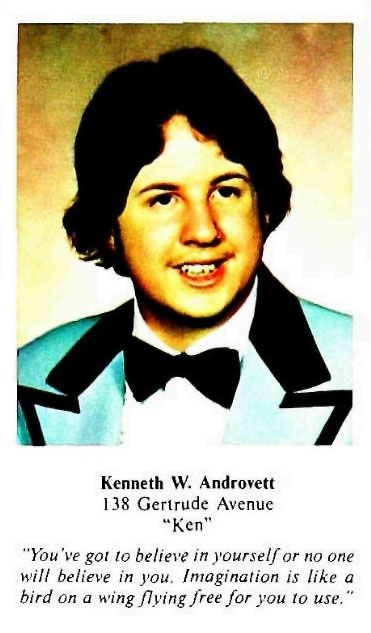 Kenneth W. Androvett, 39, of Marlboro, passed away on June 22 at Centra State Hospital in Freehold. He lived in Bergen County before moving to Marlboro three years ago. At the age of 18 he became a member of Fire Dept Company 4 of Paramus were he was an active firefighter for 11 years. In addition, he was a member of local 325 where he was appointed foreman/shopstewart for Interboro Reinforce Concrete for the past five years. He is preceaded in death by his mother Virginia in 1999, and his brother Michael in 2000.He is survived by his wife Phillyis, a son Nickolis, a daughter Sabrina, his father, Hilliard, three brothers and four sisters in law, Daniel and Donna, Philip and Maryann, Curtis and Joan, Diane, two brother-in-laws and sister in law, John and Mary Krupp, Vincent DeGregorio, a father and mother in law, John and Josephine DeGregorio, and 13 nieces and nephews. Donations may be made to the Kenneth Androvett Memorial Fund, C/O Waitt-Nelms Funeral Home, 501 Hwy 79, Morganville, NJ 07751. [Not sure if this is still an active fund.]