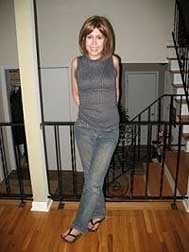 A Tribute to Laurie - Author Unknown

The first time I'd ever heard of Laurie was about 20 minutes before I wrote this when I got an email from my school concerning her.  Reading the email made me want to know more about her, and I figured there was a good chance she had a Facebook profile – and she did.  Having never met Lauri, this was my first glimpse of her.  I was impressed.  Her photo showed her to be a slim, attractive young woman with a shy smile.  She was the kind of woman to whom almost any guy would immediately be attracted, any parent would be proud, and anyone would want as a friend.

Her profile said she was born on October 10, 1984, she was from Paramus, NJ, and her political views were liberal.  Her popularity was evident from the fact that she had 119 good Facebook friends at The College of New Jersey as well as many friends from 74 other schools and Facebook networks.  Although a psychology major, she described her activities as, "Laughing and watching TV/movies.  Quoting The State or anything else that makes me laugh. Finding ridiculous things.  I'm really into my artwork now too.  I paint and decoupage – I make stuff, get crafty. I'm also quite the hipster."

This made me want to know even more, and there was much more to know.  Her interests were numerous and included running, listening to music, friends, hanging out, meditation, the environment,  Thai food, tie dye, writing, Catch A Fire, strawberry picking, decoupaging, monkey torture, Bob Marley, sports, reading (books and magazines), knitting, Curious George, dogs (of course Kirby), sunsets, scenery, gardens, palm trees, leaves changing color, sunny and nice weather, pop culture, doing my own thing, bohemian, my Beatles shirt, encouragement... Well you get the idea – she had a wide variety of interests, causes and talents.

In spite of a couple of generations apart in age, Laurie and I shared some musical interests (The Dave Matthews Band, Lou Reed, Simon and Garfunkel), and a favorite movie (Eternal Sunshine of the Spotless Mind).  She ran in the 2004 Boston Marathon and, like myself, was an Apple computer advocate.  I was really starting to like Laurie a lot.  As I browsed through the few photos she had posted, I saw her and her twin sister, Allison, having lots of fun with friends.  I wished I could have been one of them.

By the time I finished reading her profile, I really wished I had been her friend.  But very reluctantly I returned to the email that I'd gotten.  "We are deeply saddened to report that Laurie Ann Mandara, a senior psychology major from Paramus, died on September 29 after a lengthy illness.  She was 21 years old and is survived by her parents, Frank and Joy, as well as her sisters, Kimberly and Allison, who is Laurie's twin and is also a student at TCNJ."

One of Laurie's favorite quotes, from the lyrics of John Lennon's Strawberry Fields Forever, ran through my mind. "Living is easy with eyes closed, misunderstanding all you see.  It's getting hard to be someone but it all works out. It doesn't matter much to me."

I must confess to shedding a few tears for Laurie – a woman I never knew, but who opened my eyes for a few minutes... after she was gone.