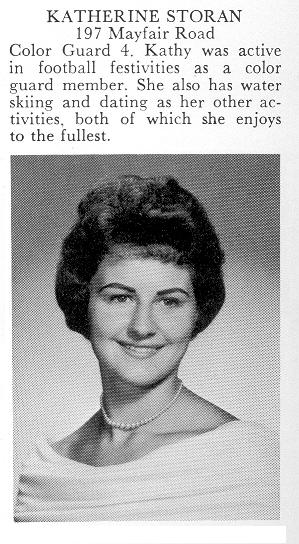 BRADBURY Katherine A., age 72, passed away on Sunday, August 24, 2014 after a courageous battle with Huntington's Disease.

She was born in Rochester, New York to parents John R. and Margaret Storan.
In 1960, she graduated from Paramus High School in New Jersey and in 1961, married the love of her life, Bruce Bradbury.

She attended the University of Maryland, was a proud military wife for over 22 years and travelled extensively.  She played softball for the Army in Okinawa and volunteered to help Navy and Army families.

Katherine was a loving wife, devoted mother, grandmother and friend; willing to jump in and take part-time jobs to help support her family. Over the years, she resided with her family in San Antonio and El Paso in Texas and at Branch Lake in Ellsworth, Maine.